Here is a quick tutorial on how to use RequestPolicy. If you have any questions or ideas, please open a new issue.

The first thing to do when setting up RequestPolicy is to choose a default policy. It determines whether cross-site requests should be allowed or blocked by default, when there are no other rules that match the request. This affects ease of use for the addon, and your security/privacy level:

Subscriptions are preset rules maintained and verified by the community. These rules can fulfil different needs, such as blocking known web browsing tracking sites, or allowing requests to allow certain sites to display/work properly.

Just select the subscriptions that you consider useful.

Note: In case there is a user rule that conflicts with a subscription rule, the user rule always has priority.

Every time a web page tells Firefox to make a request to a different website, Firefox asks RequestPolicy whether the request should be allowed. To decide whether to allow the request, RequestPolicy looks for rules in three places:

The rest of this tutorial will show you how to manage your policy. 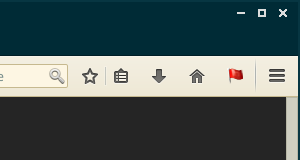 Once RequestPolicy is installed, you will see a new flag icon at the top-right of your browser window. This flag turns red when RequestPolicy has blocked requests from the current website you are viewing. Clicking on the RequestPolicy icon brings up a menu of options.

The left pane is divided in 2 sections: Origins and Destinations.
The right pane contains actions for the item you have selected form the left pane.

Destinations are domains that are targets of a cross-site request. Commonly, this can be a CDN, a separate/special domain for images or scripts used on a site, embedded objects to integrate another site, or an advertising/metrics/statistics network.

These destinations are shown in red. Requests from the current page to these domains (e.g an embedded script or image hosted on this other domain) are blocked.

Click on one of these destinations (eg. example.net). From there, the possible actions are displayed in the right pane.

Block requests from example.com to another.net and Block all requests to another.net: This is useful if you want to mark this destination as untrusted/useless/harmful.

Stop blocking/allowing requests to another.net: This removes the rule you had previously set for this destination. The default policy will be used instead.

If a destination had some requests to it blocked and others allowed, it would be listed under another category called “Mixed destinations”.

Origins are domains from where cross-site requests originate. Commonly, this is the site you are currently visiting when the cross-site request is done (there is an exception, see below). For example this can be a <script> tag in the HTML page, or an <img> that tries to embed an image from another site. Origins have one action available:

Allow requests from example.com: All requests originating from example.com will be allowed. Use this if you trust the site to never embed any harmful/useless content, and want it to work fully as intended by the site itself. This should only be used on very trustworthy sites.

That’s it! Now you should be able to do most of the things RequestPolicy is built for. For more advanced topics, you can read the documentation below.